One key aspect of my magic lantern, Opus 5, is its definitively 21st century cool-to-the-touch light source. Heat has always been a critical issue in projection technology due to the very bright light sources. All projectors are built with fans to cool them – digital projectors sometimes house several fans. For magic lanterns, heat can crack the lenses and often it cracks the slides themselves. Lanterns use both heat-absorbing glass and fans to cool their bodies and the lenses. To reiterate what I expressed earlier in the text, this may be the only contemporary projector built without a fan – lantern, film, or digital. It operates in complete silence.

My magic lantern with its tiny Argon plasma light, the gas excited by microwave frequencies, is in itself a tiny star. Unlike most light sources for projection, the plasma light is cool, not hot to the touch (150 degrees max). For bright light sources, at this moment it out-performs the LED in terms of colour (at 6000k) and quality of light. One bulb, like LED lights, lasts 30,000 to 50,000 hours. Invented by Nicola Tesla, the plasma light has been newly developed for its current use in studio and theatre lighting by Los Angeles group Hive Lighting,. I have designed and built the first projector to use the plasma light.

To see how this differs from earlier light sources and what this means to the aesthetics and practicalities of display, will require a short digression into the history of illumination.

Oil lamps, powered by one, two, or three wicks, were the first light sources for magic lanterns (candles are too dim for projection). Most toy magic lanterns used oil for illumination --eventually they used incandescent bulbs. The soft flickering light of the oil-lit lantern is beautiful and extremely dim.

And finally -- once available electricity made it possible -- arc light replaced limelight for projectors.. Arc light is produce by a passing a DC electrical charge between two carbon electrodes – the arc glows with extreme brightness.

Jack Judson, collector and proprietor of the Magic Lantern Castle Museum in San Antonio, Texas is the only person in the world who demonstrates the antique live-fuel method of very bright limelight. 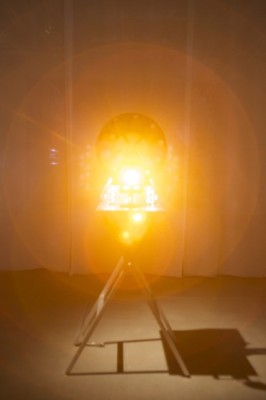